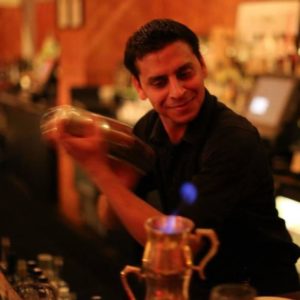 Hemant Pathak is the Mixologist/Bar Manager of Junoon, an award-winning restaurant in New York redefining Indian gastronomy and elevating it to unprecedented heights. Earning both a Michelin star and a Wine Spectator Best Award of Excellence for five consecutive years since opening in 2010, it sets the gold standard of Progressive Indian cuisine by marrying the best of India’s culinary past with its worldly future. An acclaimed bartender and mixologist, Hemant is responsible for creating Junoon’s world-class cocktail, spirits, and beer programs, including all purchasing and inventory control, as well as staff training and education.

Hemant holds court at Junoon’s high-end cocktail lounge, which he views as his stage for creating unique and contemporary quaffs that integrate rare herbs and spices of his native India that can be found at no other bar. His culinary-driven cocktails celebrate seasonal ingredients and respect the classic mixology canon while incorporating the latest techniques and thinking. By engaging in hours of conversation with Junoon’s chefs, tasting their dishes, and listening to their ideas and inspirations, Hemant creates striking and innovative libations, what he calls “glasses of experience,” that best complement Junoon’s culinary offerings.

Previously, Hemant held mixologist and bar manager positions at The Flatiron Room, American Gymkhana, and Island Steak House as he sharpened his craft and deepened his knowledge. His introduction to crafting cocktails came while working as a Steward at the prestigious Taj Palace Hotel in New Delhi, India. There he found his real passion and set out to research the art, science, and history of mixology. Within a few months, he developed a new cocktail menu for the hotel’s restaurant, which quickly garnered acclaim, and by the end of that year, he had won his first cocktail competition, with more to follow.

Hemant’s multiple accolades include winning the 2012 Bacardi Legacy Cocktail Competition in India and representing his country in the global competition that year. This followed winning top honors at the 2011 Diageo World Class Global Competition in the “Classic Cocktail with a Twist” category.

Hemant resides with his wife, Himani, in Jersey City, N.J. He enjoys swimming, photography, exploring the world via the Internet and immersing himself in hospitality magazines. Born in the foothills of the Himalayas, Hemant begins each day with meditation and prayer. His favorite at-home cocktail is the Negroni.

2014 Certified as a bourbon expert from Michael R. Veach, a Bourbon historian and a member of the Bourbon Hall of Fame